WHICH VITAMIN B12 IS BETTER, METHYLCOBALAMIN VS. CYANOCOBALAMINA.

Methylcobalamin is used primarily in the liver, brain, and the specific form of B12 necessary for the health of the nervous system, and for this reason it is an important nutrient for vision, while cyanocobalamin appears to be ineffective. It greatly aids visual accommodation, which is the ability to quickly shift focus from something close to something further away.

Pregnant or lactating women need a good amount of this vitamin. Vitamin B12 is a water soluble vitamin essential in the human diet.

The history of vitamin B12

In 1824 the first deficiencies of vitamin B12 called "Pernicious anemia" were found. Scientist Thomas Addison concluded that it was the problem due to a lack of stomach acid and not a vitamin deficiency. In 1926, scientists Minot and Murphy worked on a study by G. Whipple, who fed anemic dogs with liver only to discover their hemoglobin levels (a symptom of anemia) were restored. Finally, in 1948 the chemical form was isolated, as early as 1955 the British scientist and chemistry expert D. Hodgkins discovered the complicated structure of the aforementioned vitamin B12. Hodgkins' discovery led to the mass production of vitamin B12 as a treatment for pernicious anemia.

Vitamin B12 exists in 4 forms:

1. Methylcobalamin: This is the most bioavailable form of vitamin B12. It differs from the rest of the vitamins by having a methyl group (CH3) and its rapid absorption. It is a natural way.

2. Cyanocobalamin: This is the most widely used form in supplements because it is the cheapest. It differs from the rest of the vitamins by having a cyano group (CN), but it should be noted that this is the artificial form that is not found in nature. It is used more frequently in supplements, as it is considered more stable and cost effective than other forms of vitamin B12.

3. Hydroxycobalamin: It differs from the other forms of vitamin B12 because it has a hydroxy (OH) group. This form is created by bacteria and can be found in food sources. Hydroxocobalamin, a predominant form in foods rich in vitamin B12.

This vitamin is indicated for people with intrinsic cobalamin metabolic diseases, cases of vitamin B12 deficiency, patients with pernicious anemia with optic neuropathy.

4. Adenosylcobalamin: Also known as Coenzyme B12. This is the form used in the energy cycle. This vitamin also acts as an intermediate in the degradative pathway of valine, threonine, methionine, thymine, isoleucine, cholesterol and fatty acids. Most B12 reserves are stored in the liver as and are detected in methylcobalamin when necessary.

The most widely used forms are methylcobalamin and cyanocobalamin.

Vitamin B12 is a water soluble vitamin. After the body uses these vitamins, the excess amount is expelled through the urine, while the liver can suffer for a long time.

Deficiency is a very common factor that affects many people.

The population with the highest risk of deficiency are vegans, vegetarians and the elderly. It is common to find deficiency in vegan and vegetarian individuals because the only sources of vitamin B12 are those derived from animals. Deficiency can also occur due to inadequate absorption, such as inflammatory bowel disease, celiac disease, or decreased heartburn, which is common in the elderly.

Symptoms of vitamin B12 deficiency include the following:

- Paleness: because reduced hemoglobin leads to pale red blood that makes the membranes of the eyes look pale.

- Constipation, diarrhea and loss of appetite

And some more serious symptoms are: 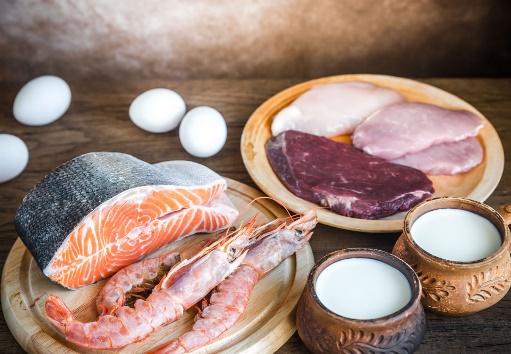 Vitamin B12 is found naturally in foods of animal origin, such as:

- Milk and other dairy products like cheese and yogurt

- Seafood (clams) (and is not present in foods of plant origin.

In the case of vegetarians they can obtain this vitamin from cereals and yeast.

Vitamin B12 in vegan people.

What every vegan should know about vitamin B12

What is said in this paragraph is a report prepared by researchers from vegan and vegetarian associations, and mostly supported by the vegan community around the world.

A very low intake of B12 can cause anemia and deterioration of the nervous system. The only reliable vegan sources of B12 are foods fortified with B12 (such as certain vegetable milks, certain soy products, and some breakfast cereals) and B12 supplements. Vitamin B12, whether in supplements, fortified foods, or animal products, comes from microorganisms.

Vitamin B12 and energy efficiency

Vitamin B12 provides people with energy, leading to a reduction in the feeling of fatigue, better functioning of the nervous system and a positive increase in mood.

Vitamin B12 and cellular health

B12 and the immune system

Adequate vitamin B12 intake helps support a healthy immune system and less risk of illness from viruses or bacteria.

Vitamin B12 and cognition

Vitamin B12 aids in the longevity of the brain.

An appropriate intake of this vitamin protects against cognitive decline.

Mothers with vitamin B12 deficiency have a high risk of fetal neural tube defects in their babies compared to mothers with an adequate intake of vitamin B12.

The most suitable treatment is the best diet, but there are people who do not consume animal products and that is when the use of supplements is required, either orally, intramuscularly or nasal.

For most people, treatment resolves the symptoms presented during the deficiency, but any damage to the nerves that has occurred due to the deficiency could be permanent.

The amount of each vitamin needed depends on your age and sex. Other factors, such as pregnancy and illness, are also important. Pregnant or lactating women need higher amounts. Ask your provider what amount is best for you.

Dietary Reference Intakes for Vitamin B12:

Adverse or side effects of vitamin B12.

Vitamin B12 even taken in large amounts is not toxic, but there are people who have had side effects. When taken orally with pills (cyanocobalamin) there is less chance of side effects.

Vitamin B12 injections are more likely to cause adverse or side effects, due to the preservatives present in their formula.

In some cases the use of gel can also cause hypersensitivity.

Some adverse or side effects are as follows:

Interactions of vitamin B12 with other medications

Some of the possible interactions are as follows:

• Aminosalicylic acid. This medication is used to treat digestive problems, which may decrease the body's absorption of vitamin B-12.

• Colchicine (Colcrys, Mitigare). This medication is an anti-inflammatory used to prevent and treat gout attacks, which may decrease the body's absorption of vitamin B-12.

• Metformin (Glumetza, Glucophage, Fortamet). This medication is used to treat diabetes and may decrease the absorption of vitamin B-12.

• Proton pump inhibitors (Prilosec), lansoprazole (Prevacid). These medications are used to reduce stomach acid, which may decrease your absorption of vitamin B-12.

• Vitamin C supplements (ascorbic acid). Taking vitamin B-12 with vitamin C may reduce the amount of vitamin B-12 available in the body. It is recommended to take vitamin C two hours or more after taking a vitamin B-12 supplement to avoid health problems.

• Chloramphenicol. It is an antibiotic used to treat certain infections.

• Cimetidine. It is a medicine used to treat ulcers, gastroesophageal reflux diseases (heartburn).

Your doctor may recommend changing medications or coordinating doses to compensate for possible interactions.

Who is at risk?

People with chronic alcoholism may lack vitamin B-12, because their bodies do not absorb the proper amount of nutrients.

Diabetic people, the use of Metformin which is the medicine used to control diabetes can reduce the absorption of vitamin B12.

There is some evidence that shows the following.

• Diseases of the heart and blood vessels. There is evidence showing that vitamin B12 combined with vitamin B6 and vitamin B9 (folate) are effective in controlling high levels of homocysteine ​​in the blood, while homocysteine ​​is an amino acid that is synthesized in the body from the methionine that is acquired from animal proteins and is metabolized mainly in the liver. If there are low levels of vitamin B12, homocysteine ​​will appear in very high values, above 11mcmol / L, with 6-7mcmol / L being the most normal value.

• Dementia. Insufficient intake of vitamin B-12 could lead to dementia and decreased cognitive function.

Vitamin B12 levels can be measured in the blood, for example, if the person has megaloblastic anemia, has a B12 deficiency, but this test is not valid in vegetarians, who usually take a lot of vitamin B9 (folic acid) and would avoid megaloblastic anemia. despite taking little B12, although not the neuronal damage that occurs with a continued deficiency of B12.

Blood levels of vitamin B12 will be fine if the result is equal to or greater than any of the following values ​​(equivalent measurements):

The best way to satisfy the needs of vitamin B12 is by consuming foods of animal origin.

Supplemental vitamin B12 can be found in:

• Multivitamins. There is better absorption in the body when consumed in conjunction with other B vitamins such as niacin, vitamin B6, riboflavin, and magnesium.

• Vitamin B12 can be administered by injection or as a nasal gel.

• A very comfortable way to ingest it is through a sublingual pill.

Finally, it is concluded that it is evident that vitamin B12 is essential to enjoy good health in the medium and long term. When consumed through the aforementioned foods or through supplements, these are stored in the liver where they have a shelf life of approximately up to three or four years. That is why sometimes symptoms take time to appear.

The probability of suffering adverse or secondary effects from the intake of vitamin B12 is very, as mentioned, they sometimes occur when the intake is through injections or the use of gels.

It is of utmost importance to carry a correct diet to achieve a balance of necessary nutrients, including foods of plant and animal origin, in addition to them, the practice of exercises that together make the body function better physically and mentally is recommended.

It is advisable to carry out routine exams where they can identify if there is any vitamin B12 deficiency and choose the best method for its intake with the consultation of your doctor, these exams can be performed in clinical laboratories with prior indication from the treating doctor.

The lack of information about vitamins, where to find them, what effects they can produce, with which medicines they should not be taken, the quantity, the different routes of administration lead people to an absolute ignorance and always attribute the symptoms presented to another disease due to vitamin B12 deficiency, on the other hand, overdosing could also produce side effects, so it is recommended not to self-medicate.

In children supervision by an adult is very important and in adequate doses as well.

Visit your doctor regularly, ask questions and ask for diet advice to be able to have a balanced diet that provides all the necessary nutrients to have excellent health.

And finally it is recommended to exercise so that in combination with an adequate intake it maintains the functioning of our body in optimal conditions.