What does turmeric taste like? According to its flavor, turmeric is a type of a peppery herb; it is predominantly aromatic, bitter, and has a woody scent. That profound, unrelenting flavor in most curries is turmeric for sure. Indeed, turmeric doesn't have exceptional taste when eaten raw. It possesses an enticing flavor, and it enhances the taste of the food products that it's added to.

Along with flavoring in curries, it is usually used to add color. Turmeric is also used in pickles because it offers a delicious flavor. Although turmeric has an incredible taste, the color it gives to the food is just as amazing. It's extremely strong, and everything it touches will take color immediately.

Ways to Incorporate Turmeric into Your Diet

Since turmeric has quite a strong flavor on its own, it cannot be consumed raw. However, this gold-colored spice does more than just adding flavor and color to your food. Turmeric holds numerous health benefits that can significantly enhance your well-being. Therefore, we have rounded up various ways to add this magical ingredient to your everyday diet. 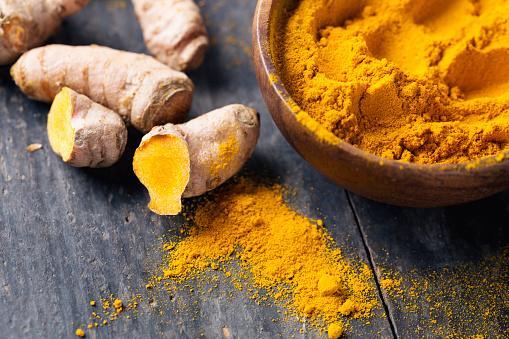 Prior to tossing it on the flame, add turmeric into your chicken sauce. If poultry isn't your favorite, employ it to give a shot of seasoning to your favorite meal. You could team it for a very spicy recipe with curry powder, tarragon, and white pepper.

Adjust the fried, bland old eggs with a sprinkle of turmeric. You could even append some other condiments you like, and you will be able to take your everyday breakfast up a notch. This Indian influenced meal gives you the energy boost that you need to start your day.

You may consider brewing a turmeric iced tea or perhaps make ice cubes with a pinch of turmeric to chill in the sweltering summer heat. They are quick to create, and you can easily have your daily requirement of turmeric. Simply drop them into your drink, and there you go.

Curry is a popular Indian food, and usage of the famous sub-continental spice seems perfectly logical. Turmeric is a primary ingredient used in curry powder. When you are first using turmeric, test it out in a curry since it tastes the best in its natural habitat.

A vegetarian cabbage soup recipe includes turmeric, smoked paprika, and black pepper to add some spice that you could use on a chilly evening.  It also binds to a few other additional flavors that blend very well turmeric, including fenugreek and buttermilk.

The exquisite Indian flavorings of turmeric make a perfect rice recipe. Here, you can apply some of the ingredients that accompany turmeric and then include the veggies and your preference's protein source. This neon orange rice dish brings a nutritious dimension to your meal.

Since we have already talked about soup, the broth is also similar, but it consists of the stock of vegetables, poultry, or red meat. All broth types have fantastic healing properties and are incredibly beneficial in treating flu and boosting collagen production in our body. The addition of turmeric to this magical drink will greatly enhance its healing properties.

Who doesn't love a nice juicy lamb chop? Now imagine those tender chops being marinated with yogurt and a healthy dash of turmeric. We assure you that the meat would taste divine and get a healthy meal out of it.

This unique latte is termed Golden Milk owing to the deep golden color that is produced by the turmeric. Coupled with milk, cinnamon, and brown sugar, turmeric's immune-strengthening qualities can enable you to overcome every flu. 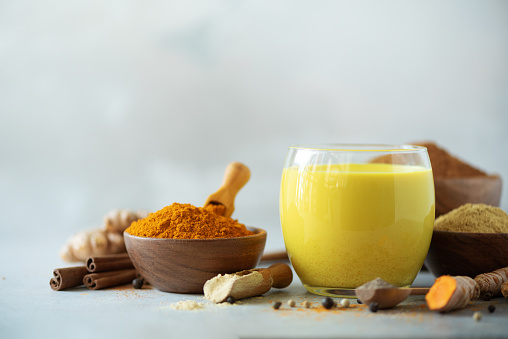 Have you really wondered how mustard emanates its vivid color? This ingredient is also the source of mustard's yellowish color, no matter how cheap the product is.  So, we suggest avoiding the tomato sauce and opting right for the mustard sauce in your upcoming dinners and lunches.

Turmeric contributes its brilliant restorative abilities to make any healthy lunch choice even better. All you need is a little salt, pepper, balsamic vinegar and perhaps some lime. You will get a healthy meal that is brimming with exotic flavors.

This spice will offer a ton of vitamins and minerals if you choose the appropriate quantity, without introducing far too much taste. However, if you don't like the potent flavor of turmeric, mix it with any of the spices you want. This recipe requires carrot, lime, ginger, grapefruit, and pineapple, all with their own significant nutritional advantages.

Veggies such as tomatoes, gourds, and broccoli go well with turmeric.  It is an excellent approach to allow root vegetables to be consumed as a whole meal rather than a usual side dish.

Attempt for some turmeric, squash, and cardamom pancakes for a sweet, hot brunch in the autumn afternoon. The spices can complement one another, but the turmeric produces a stunning golden hue that calls out to fall.

Munching on chickpeas is really in demand these days and with good cause. They are safe, simple to produce, and fulfilling. These contain turmeric, tarragon, and garlic powder to create a high-protein, nutritious, rich treat that requires not more than half an hour to produce.

When you wouldn't want to be all that complicated with turmeric, just add a splash of citrus in your drink. Your brain acquired immunity, and organs will applaud you for this cleansing drink. It's going to wake you up and help you look happier than a mug of coffee in the morning.

Since we already have the famous golden milk, then why not add a few more ingredients to it and turn it into a nice homemade turmeric pie. It would not only taste good, but your body will thank you as well.

This delicious oatmeal can be brunch, dinner, or lunch. Prep the oatmeal in full-cream milk, then incorporate whatever ingredients you like. When you like more nutrition, you should incorporate fruits and even nuts.

Turmeric has been used to treat various ailments and health conditions for centuries. Its recuperative properties are acknowledged in both herbal and scientific medicine. The following are a few of its major health benefits:

Excessive exposure to free radicals will screw up your immunity and genetics. It may also contribute to a variety of severe illnesses and disorders, namely obesity, diabetes, cardiovascular failure, and dementia. Spices loaded with antioxidants such as turmeric have a significant part in shielding you from harm caused by free radicals.

Multiple experiments have shown that turmeric can enhance intracellular activity or protect the delicate lining that protects the interior of the cardiovascular system. This membrane performs a vital function in monitoring blood pressure. Higher endothelial activity is correlated with ageing and an elevated risk for heart failure. Turmeric may also help guard from loss of mobility due to increasing age.

One of the key statements of turmeric to prominence is that it is widely used to combat inflammation. Since systemic inflammation leads to multiple systemic disorders, turmeric could help cure illnesses such as irritable bowel syndrome, gastritis, and joint problems.

Turmeric can support to avoid diabetes by its powerful antioxidant effects and reduce several of the conditions that lead to diabetes, namely insulin sensitivity, elevated blood pressure, and dyslipidemia.

Since inflammation is correlated with tumor formation, anti-inflammatory agents like turmeric perform a responsibility in reducing and managing many forms of cancer, namely colon cancer, pulmonary cancer, and stomach cancer.

However, evidence shows that turmeric could improve delay tumor cell proliferation and even deter tumors from developing initially. It may do so in various aspects, like preventing cancer cell development at specific phases in the cell division, interacting with cellular activation processes, and leading some malignant cells to die out.

Turmeric can be an excellent cure for a range of skin disorders, particularly acne, photodamage, and rosacea, due to its anti-inflammatory, antifungal, and antioxidant powers. This also serves as an anti-aging supplement for skin. 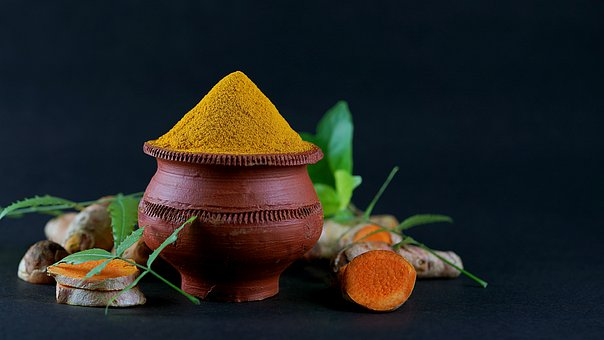 Turmeric can also prevent your brain from frequently diagnosed diseases such as Alzheimer's. This is achieved through the amounts of a protein present in the central nervous system, which serves an important function in preserving stable nerve cells and controlling connectivity among nerve cells, which would be important for cognitive function.

Turmeric has a potent flavor and bright yellow/golden color that can greatly enhance your food taste. Its healing properties make it a natural medicine for multiple health conditions as well.