Nothing outshines all the delicious fruit, mainly watermelon, that tends to come alongside summer. Not to imply that you can't love it all year long, but on a humid summer day, there is something exceptional about digging in a craving-quenching slice of watermelon.  Many people believe watermelon appears to lack nutrients and is filled with sugar, but this couldn't be any further from reality.

Watermelon is a tasty and soothing fruit and is healthy for you as well. It only comprises a few calories but is rich in vitamin C, vitamin A and several other antioxidants found in plants. Keep reading to learn more about the health benefits of regular watermelon consumption. 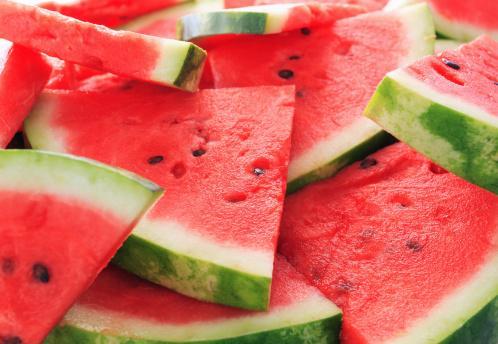 The following are the essential benefits of watermelon:

Lycopene is yet another critical compound present in watermelons, which has significant advantages. Lycopene has been shown to possess anti-inflammatory properties. Lycopene is deemed the strongest between the numerous carotenoids. In response to the claim, lycopene's positive effects on inflammation are considered much more potent than beta-carotene, an essential carotenoid.

Lycopene, again, is getting the glory. Lycopene has been detected in watermelons to decrease the level of cancer uprising according to a study. Lycopene is the dye that gives watermelons their signature red hue, and since it is a potent antioxidant, it stops some cancers from starting up.

If, after a training session, you're having difficulty with your muscle soreness, watermelon could make a significant contribution. The fruit is filled with electrolytes and citrulline amino acids, which tend to relieve the sore muscles after a hard workout. And according to a study, citrulline in watermelons can help to minimize muscle tiredness.

Watermelon helps relieve acid reflux, which is a common condition of pregnancy. It also helps in alleviating morning sickness. The nutrients in the fruit can help reduce muscle spasms in the third trimester. Watermelon can be beneficial in other ways for expecting mothers too.

Watermelons are an ideal supplier of lycopene; it has also been shown to minimize the likelihood of degenerative macular disease. Lycopene was proposed as a possible cure for ocular conditions such as macular degeneration.

Antioxidants are vital for eye health because they provide prevention from free radicals. The result of free radicals may be terrifying – they can contribute to eye lens loss and even trigger blindness. This is avoided by lycopene, a powerful antioxidant.

Lycopene, as one of the primary antioxidants, assists in the body's response to the common cold. And what's more fascinating is that this antioxidant has been shown to minimize flare-ups of asthma.

Watermelon also helps inflammation of the airways, allowing people to breathe properly without stressing every breath. Sufficient intakes of lycopene and vitamin A may be helpful for asthma patients, according to a study.

Watermelon is the only fruit that is abundant with natural citrulline.  Furthermore, as per a report, citrulline is closely linked to arginine, an important amino acid for managing high blood pressure. Watermelon is also a healthy source of potassium. The vitamin is used to bring down elevated blood pressure. Potassium is also an electrolyte that manages blood pressure throughout an intense workout.

Watermelon is a strong source of vitamin C, the vitamin that is important for collagen production. Collagen makes your skin moist, and your hair tightens. Lycopene and beta-carotene can shield the skin from sun damage, according to one report.

Beta-carotene is also responsible for avoiding such diseases of the skin such as rosacea and vitiligo. Another essential nutrient that makes a significant contribution to skin health is vitamin A in watermelon, as it restores and develops new skin cells. Without the mineral, the skin will look tired and prickly.

Vitamin C appears to play an important part here, as the vitamin is good for the bones and helps repair the laceration. Research indicates the treatment of lycopene can avoid osteoporosis and fracturing in the bone. Vitamin A present in watermelons has also been related to bone development.

One of the greatest nutritional benefits of watermelon is that it also assists with safe weight management. Yeah, watermelon will fill you up with fewer calories, thanks to its higher moisture content. Furthermore, water has been shown to improve metabolic processes and filter out toxins and fats and ultimately lead to weight loss.

Although watermelons may be decent potassium sources, the concentration is lower relative to most other foods. That's why it can be ideal for people with chronic kidney disease, who prefer to stick to reduced-potassium food choices. In certain people who have chronic kidney failure, though, the kidneys will not eliminate the extra potassium from the blood.

While watermelon has a higher glycemic index, it has a reduced glycemic load, which is the magnitude with which a specific food increases blood sugar levels for an organism, and is ideal for diabetics. That being said, take recommendations from your physician in this respect-as otherwise indicated by some small-scale trials.

The citrulline of the amino acid in watermelon unwinds and dilates the veins and arteries, helping relieve erectile dysfunction. Citrulline is transformed into arginine, a nitric oxide intermediate that assists in dilating the blood vessels.

Oral citrulline treatment was thought to promote erection stiffness in men with moderate erectile dysfunction, as per one study. Even watermelon can function as a natural Viagra. The components in watermelon, the phytonutrients, in particular, interact with the human body and cause certain reactions. 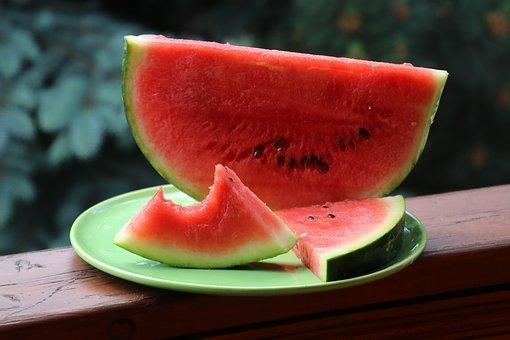 Watermelon is believed to avoid hyperthermia, owing to its elevated moisture content. Watermelon is among the few heat-clearing fruits that alleviate tiredness and dehydration. It also helps ease heat stroke and uses the rind's outermost layer for this purpose.

Watermelon is a rich supplier of vitamin B, which produces energy in your body. The fruit is lower in calories and high in power, and it also keeps you energized throughout the day.  A further factor you need a watermelon so you can continue at the top of the competition is potassium. Potassium is an electrolyte that prevents you from feeling exhausted after a day of tiredness.

Calories in Watermelon and their Recommended Daily Intake

There are 30 calories in 100 grams of prunes, and the recommended daily intake is up to four cups.

Tips for serving watermelon include:

Add some chopped watermelon and a couple of ice cubes in a blender for a cool, soothing, electrolyte drink ideal for rehydration following exercising or a day in the heat.

For a savory and healthy salad, introduce watermelon, cinnamon, and goat cheese to a layer of spinach leaves. Sprinkle some vinegar on top.

For additional zest, make a watermelon smoothie or mix it with orange juice. Recall that the juicing breaks down the carbohydrate, making it possible to digest sugar. Diabetic patients should try eating whole, fresh watermelon instead of consuming juice.

Side Effects of Watermelon Consumption

For most people, small watermelon levels may not present a significant risk to human health, but some will need to be vigilant.

Watermelon is a natural sugar-bearing fruit. Individuals with diabetes have to consider these calories with their regular meal plans. It is safer to eat entire watermelon instead of concentrating because juicing eliminates the fiber, rendering it simpler for the body to digest the sugar. That may raise the chance of a surge in glucose. Recall the following portion sizes for all fruits and juices.

Others may show signs of an allergic reaction after consuming watermelons, such as blisters, inflammation, and trouble breathing. The individual needs healthcare if this occurs, as it can also lead to anaphylactic shock, which is a life-threatening disease.

As we have shown, the bulk of watermelon's advantages can be traced to lycopene. And the same drug can also cause health problems if the fruit is eaten frequently. Excessive consumption of lycopene can lead to nausea, vomiting, digestive problems, and diarrhea. 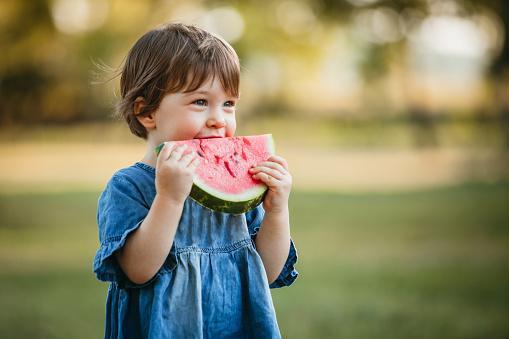 Watermelon is a remarkably nutritious fruit. It has significant water content, and many other essential nutrients, particularly lycopene and vitamin C, are also given. These vitamins and minerals mean watermelon is not only a great low-calorie treat but it is also very beneficial for your well-being.