Known for their pungent aroma, cumin seeds are an integral ingredient of desi households, specifically in the South Asian region. They are also used in other regions of the world as part of different cultural cuisines and dishes. Not only that, cumin seeds have long been used for medicinal purposes and even today, they continue to be a source of natural remedy for a whole host of health conditions.

The seeds are yellow-greyish in color and oblong in shape. Their aroma is so strong that you don’t have to tell if anything contains cumin seeds – it simply smells. Cumin seeds have been in use since centuries as an ingredient in curries, rice, kormas, pilaf, biryani, soups and in combination with other spices for a variety of traditional cuisines and dishes. They are native to the South Asian region however; the popularity of cumin seeds has reached almost every corner of the world. Cumin seeds are liberally used for the purpose of home remedies and treatments as well. In fact, the Ayurvedic system of medicine regards cumin seeds as of great value when it comes to treating digestive disorders and other health conditions.

The following nutritional facts and figures are based on one teaspoon of whole cumin seeds, as per the database provided by the United States Department of Agriculture’s Food Data Central Database:

Cumin seeds are also rich in antioxidants, which makes them a natural remedy for numerous health conditions like bloating, gas, diarrhea, spasms and colic etc.

Traditionally used for the treatment of diarrhea, gas, bloating, to ease menstrual pain, colic and bowel spasms, cumin seeds are packed with nutrients that offer plenty of health benefits such as:

An excellent source of iron and dietary fiber, cumin seeds help to boost the immunity system of the body. It helps the body fight against diseases and prevents you from getting sick. A great way to consume cumin seed is through cumin water, made simply by boiling a spoonful of cumin seeds in water and having them in the morning or even at night.

Medical research shows that cumin seeds help in stimulating the production of insulin in the body. As a result, the levels of blood sugar can be reduced, making cumin seeds a blessing for diabetic patients.

An essential mineral present in cumin seed is potassium, an extremely significant mineral that promotes proper functioning of the body. A regular intake of cumin water made of cumin seeds may help in regulating blood pressure by reducing the negative effects of salt in the body, with the help of potassium.

A natural source of energy indeed, cumin seeds are packed with essential nutrients that help to increase your energy levels throughout the day.  A dose of cumin seeds every day may lead to a more energetic body, ultimately leading to a good mood and better health.

Cumin seeds have certain nutrients that help in the detoxification of toxins from the body. Their great digestive properties allow them to detoxify the liver of unnecessary toxins and lead to a better functioning healthy liver.

Anemia is one of the most common health conditions that majority of people face today. A key mineral present in cumin seeds is iron and iron is known for playing a significant role in promoting good health of the body. Therefore, a daily intake of cumin seeds cannot only fight iron deficiency but also helps in treating anemia.

Cumin seeds are closely associated with healthy skin. It contains a good amount of minerals such as calcium, copper, manganese, selenium and potassium, which in combination with each other, promote the rejuvenation of skin.

The antioxidant properties of cumin seeds render them as a great tool for anti-ageing. Cumin contains vitamin E, which is directly involved in anti-inflammation and prevention of premature ageing.

If you have an acne prone skin, cumin seed is one natural ingredient that could prove to be your holy grail. Due to its antioxidant properties, cumin works as a natural remedy for acne and keeps the skin glowing.

The essential minerals that aid in digestion make cumin seeds a source of weight loss agent. A daily intake of cumin water may help boost your metabolism along with accelerating other necessary processes of the body, which can ultimately lead to a healthy weight loss.

Apart from its medicinal purposes, cumin seeds are also used in a variety of foods as an essential ingredient. They are also used in beverages and their aromatic property makes it inevitable for consumers to use cumin seeds as a flavoring component. In some regions, cumin oil extracted from cumin seeds is used as a fragrant ingredient in cosmetics. The seeds of cumin are loved for grilling meat and fish as well. 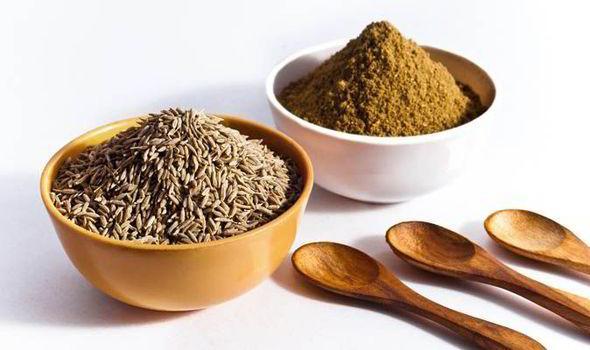 Potential Side Effects of Cumin Seeds

Although there is insufficient research regarding the side effects of cumin seeds, it is usually told to people with bleeding disorders to avoid cumin seeds as it could worsen their condition. Cumin is associated with slowing down blood clotting and therefore, as a precaution you need to be careful before taking cumin. Also, cumin may interact with antidiabetic drugs therefore, it is necessary to consult your doctor if you are concerned about any possible side effect of cumin seeds because generally, there are no side effects or scientifically proven side effects, to be precise.

As far as the correct dosage is concerned, there is not a specified dosage amount that is recommended. Usually, a pinch or spoonful is used in cuisines on a daily basis. Similarly, in order to consume cumin seeds as a natural remedy, the same amount is utilized. It is however, better to consult your health care professional or a doctor before you decide to consume cumin seeds on a daily basis as they could provide with a better, expert opinion.

Cumin seeds are generally categorized into these three types:

Scientifically known as Cuminum cyminum, white cumin seeds are native to South Asia and East Mediterranean. These are popularly grown in Pakistan, India, Iran, China, Uzbekistan, Egypt, Morocco, Turkey and Mexico. The main constituent of white cumin seeds is cumin aldehyde, and these are traditionally used in the form of whole and ground seeds. The seeds are generously used in cuisines as well as for medicinal purposes.

Known as Nigella sativa, black cumin seeds are another outstandingly popular type of cumin seeds. These are also native to the Southwest Asian and Middle Eastern Mediterranean region, abundantly grown in countries like India, Pakistan, Saudi Arabia, Iran, Turkey and Syria. The black cumin seed is used as a spice in the Indian and Middle Eastern cuisines. In addition to that, it is also used as a treatment of many diseases such as asthma, fever, eczema, inflammation, diabetes, hypertension, bronchitis and dizziness. In fact, in the Islamic tradition, black cumin seed is revered as a remedy to every disease that exists except death.

Another kind of cumin seed is the bitter cumin or locally known in the subcontinental region as Kashmiri zeera or Shahi zeera. The bitter cumin is scientifically known as Cuminum nigrum, and it is native to the mountainous regions of North India as well as Central Asia. Similar to its counterparts, bitter cumin seed is also used as a spice in Indian cuisines and the name Shahi zeera suggests its association with the Moghul cooking, an immensely popular cooking style in the Indian and Pakistani region.

Cumin Seeds in a Nutshell

To say the least, it would certainly not be an exaggeration to state that cumin seeds are a gift from nature. They can be utilized in the form of food ingredients or as a medicinal herb, that has the capacity to help fight against diseases and aid in the treatment of others. A daily intake of cumin seeds is likely to enhance your overall performance by increasing your energy and boosting your immunity system. Just a spoonful goes a long way!