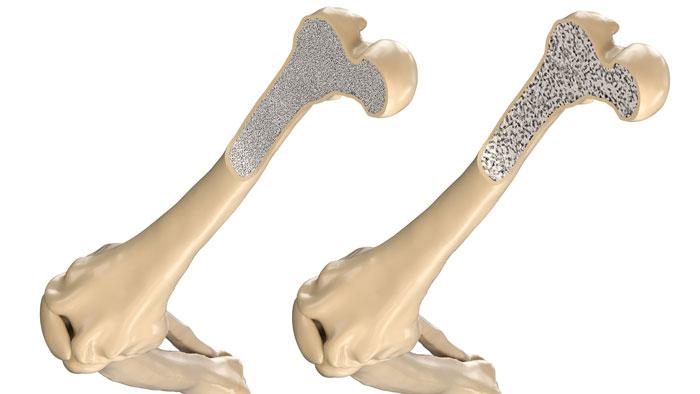 Bones are the living tissue that is constantly broken and replaced. Osteoporosis occurs when the creation of new bones does not accompany the loss of old bone. Hence it is important to know more about this disease so keep up with us.

It is a disease that is characterized by a low bone density and damage to its structure to the point that the bone is fragile and fragile, and the fact that this disease is silent in the sense that it is not accompanied by the appearance of symptoms usually, it is usually revealed when a bone fracture occurs; As the bones have lost much of their structure and strength over several years, the bones most affected by osteoporosis are the bones of the wrists and hips, as well as the bones of the spine

Bones go through a life cycle continuously, meaning that the body breaks down the old ones and replaces the old ones with new bone tissue. In fact, the rate of speed of building the new bone varies with the age of a person, for example when a person is in childhood; The bone building speed is much higher than the rate at which it was destroyed, which causes the bone density to increase significantly.

As for the relationship that relates to the above with osteoporosis, it is simple, and it can be summarized by saying that the chance of suffering from osteoporosis depends heavily on the maximum bone density that one reached in his youth years, the greater the bone density, the less the chance of developing osteoporosis, and what determines the density The maximum bone of an individual is the genetic factor as well as the race to which a person belongs.

The early stages of weak bone mass (Bone mass) are usually devoid of pain or other symptoms. However, from the moment when osteoporosis appears weak or atrophy, some symptoms of osteoporosis may begin to appear, among them:

Mostly, treatment recommendations are based on an estimate of your risk of a broken bone in the next 10 years, and this is through information such as a bone density test. If that risk is not high, treatment may not include any medications and instead focuses on adjusting risk factors for bone loss and falls.