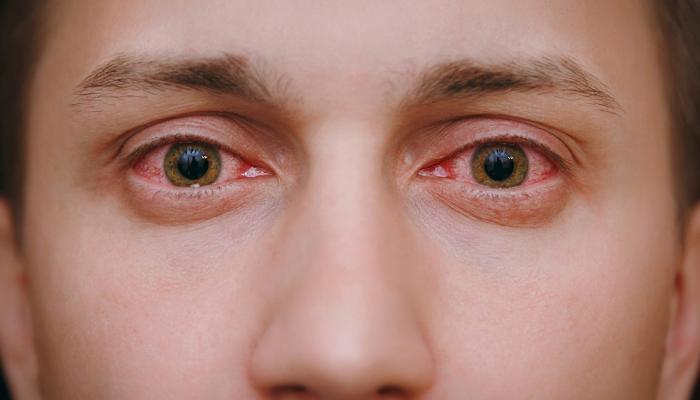 The conjunctiva is a transparent membrane that lines the inner part of the eyelid and other parts of the eye. When an inflammatory process occurs in the eye, the blood vessels in it widen and protrude more, making the eye appear red. In this article, we will discuss the definition of conjunctivitis, the causes of its occurrence, and how to treat it.

It is one of the most common types of eye infections in children and adults and is often known as infectious ophthalmia. This inflammation is accompanied by swelling in the conjunctiva of the eye. Conjunctivitis may result in eye viral injury or bacterial or after the use of allergenic materials Lye hair and dirt, smoke and chlorine pools or causing substances allergic sensitivity or sexually transmitted infections, transmitted contagious conjunctivitis easily from person to person but it is not a serious medical condition if it is diagnosed and treated in time early.

Patients experience severe itching and burning in both eyes. Although symptoms usually affect the eyes evenly, it is rare for one eye to be more affected than the other. The conjunctiva becomes red and swollen sometimes, giving the surface of the eyeball a swollen appearance. Severe itching may occur in the eyelids. The rubbing and itchiness of the eyes cause red skin on the eyelids and swollen and wrinkled appearance.

For keratoconjunctivitis keratitis, the eye secretions are thick, threaded, and resemble mucus, and keratoconjunctivitis keratitis often occurs in the cornea (the thin layer in front of the iris and pupil), and small, open sore ulcers (corneal ulcers) appear. These ulcers cause deep eye pain when exposed to dazzling light (photophobia), and sometimes lead to permanent vision impairment.

Drops containing an antihistamine, such as ketotifen, may be sufficient for mild cases.

If ketotifen is not effective, a doctor's eye drops that contain an antihistamine, such as olopatadine or mast cell stabilizers such as nedocromil, may be effective. Eye drops that contain NSAIDs, such as ketorolac, help relieve symptoms. Eye drops that contain corticosteroids have more powerful anti-inflammatory effects, however, these drops should not be used for more than a few weeks without the supervision of an eye specialist, because they may lead to increased eye pressure (glaucoma), cataract and an increased risk of eye infection. Oral antihistamines, such as fexofenadine, cetirizine or hydroxyzine, may also be very helpful.

"What Is Allergic Conjunctivitis?". medicalnewstoday.com. Archived from the original on 16 March 2010. Retrieved 6 April 2010.